Gallstones are hard deposits that form inside the gallbladder, a small organ located behind the liver on the right side of your abdomen. 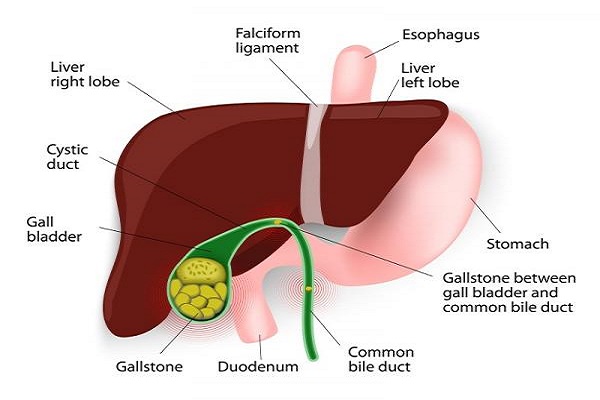 Pregnancy, obesity, diabetes, liver disease, a sedentary lifestyle, a high-fat diet, and certain forms of anemia are some of the risk factors for gallstones. People older than 60 years of age, females, and people of Native American or Hispanic descent have a greater risk of gallstones.

Many people develop gallstones and never know it. But when a gallstone obstructs the bile duct, it can cause symptoms like a sudden onset of severe pain especially in the right side of the abdomen, back pain, nausea or vomiting, bloating, indigestion, chills and clay-colored stools. The pain caused by gallstones may last for a few minutes to several hours.

Gallstones can cause a lot of pain and must be treated immediately. So, consult your doctor for proper diagnosis and treatment. There are several natural home remedies too that you can use to prevent and treat gallstones.

Here are the top 10 home remedies for gallstones.

The acidic nature of apple cider vinegar stops the liver from making cholesterol that is responsible for forming the most common type of gallstones. It also plays a key role in dissolving gallstones and alleviating pain.

Another good ingredient for keeping gallstone attacks under control is lemon juice. It stops your liver from making cholesterol, which helps in faster recovery. The pectin in lemon juice is believed to help get rid of gallbladder pain attributed to stones.

Peppermint aids digestion by stimulating the flow of bile and other digestive juices. Plus, it has a compound called terpene that can effectively dissolve gallstones. It is also believed to help relax spasms and relieve acute gallbladder pain.

When suffering from gallstones, it is essential to cut down on fried and fatty foods. For a week or two, follow a strict diet based on fruit and vegetable juices. A mixed vegetable juice made of beetroot, cucumber and carrots is a good remedy for gallstones.

Psyllium is a very good source of soluble fiber, hence it is considered a good remedy for gallstones. The fiber in psyllium binds to the cholesterol in bile and helps prevent gallstones from forming.

Plus, it promotes normal bowel movements, which reduces the risk of the gallbladder system becoming congested. In addition, psyllium prevents constipation, a condition associated with increased gallstone formation.

Note: When taking psyllium, make sure you drink lots of water as it absorbs water.

Dandelion is another very useful herb for the treatment of gallstones. It contains a compound known as taraxacin that helps in bile excretion from the liver. This also helps detoxify and metabolize fat accumulated in the liver. When the liver starts functioning properly, it aids gallbladder functioning.

Also, you can eat the tender dandelion greens by adding them to your salad or steaming them.

Note: Those who are diabetic should avoid dandelion.

Castor oil has many medicinal and healing properties that can help minimize and reduce the number of gallstones. Its anti-inflammatory properties help neutralize inflammation and reduce pain. Plus, castor oil packs have a positive effect on the immune and lymphatic systems.

Pears can also provide relief from gallstone pain and other symptoms. The compound pectin present in pears helps soften cholesterol-filled gallstones, which in turn get flushed out of your body easily.

Researchers from the University of East Anglia found that wine can actually help prevent gallstone attacks. They studied the diets of 25,639 people over 10 years. Those who drank two units of wine (a medium-sized glass of wine) daily reduced their risk of developing gallstones by one third.

Before taking any of the herbal remedies such as dandelion, peppermint or milk thistle, make sure to first consult your doctor as they may not be suitable in some cases.

Also, along with these remedies, you need to drink plenty of water. Water helps keep bile in the gallbladder and assists the body in breaking down fat that could otherwise worsen your condition. For maximum benefits, drink six to eight glasses of water daily.