We all keep a box of baking soda at home, as this versatile product has a myriad of uses in every household.

It is primarily used as a leavening agent in baked goods, as in a combination with an acid, it reacts, creates bubbles and releases carbon dioxide gas, which causes the dough to rise.
In its natural form, it is known as nahcolite, which is part of the natural mineral natron, which is high in sodium bicarbonate.

Natron was used in ancient Egypt as soap for cleaning, but in 1846, Dr. Austin Church and John Dwight started to manufacture and sell it as baking soda. In the next two decades, it was used as a cooking additive and by the 1920s, people have learned its potential as a medical agent. 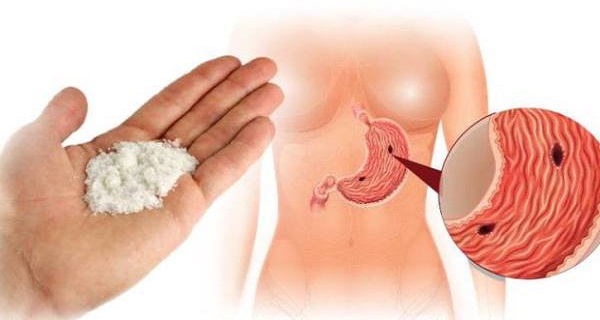 It is undoubtedly the cheapest homemade remedy, and here are 11 surprising ways to use it:

It neutralizes the stomach acid, relieves indigestion and heartburn, and treats ulcer pain. Dissolve half a teaspoon in a half a glass of water, and take it every 2 hours.

Yet, note that this should be an occasional treat, as the excessive use might cause serious electrolyte and acid/base imbalances.

Since it is a mild abrasive, it can help you clean and polish the teeth, eliminate plaque and fight bad breath. Its antibacterial properties fight Streptococcus mutans bacteria, which is a common contributor to tooth decay.

Mix 6 parts of baking soda with 1 part of sea salt and you will get an effective tooth and gum paste. Blend them for half a minute, and transfer the mixture to a suitable container.

Use a pinch of baking soda and water instead of the commercial deodorants which are full of parabens and aluminum. You can also apply some baking soda directly on the armpits.

To remove dirt from the hands and neutralize odors, wash them with a mixture of 3 parts of baking soda and one part of water.

Mix baking soda and water and apply the paste on the insect bites to soothe the itching. It will also heal minor skin irritations, itchy rashes, and poison ivy.

Scrub the feet with baking soda to exfoliate them. You can also add 3 tablespoons of baking soda to a tub of warm water and soak the feet in it to relax them and soothe the skin.

To relieve the sunburns, enjoy a bath with a ½ cup of baking soda. You can also apply a cold compress with water and baking soda to the irritated areas.

Add some apple cider vinegar and baking soda to your bath, and soak in it to relax, and soften the skin.  Additionally, this will also clean the drain and tub afterward!

You should soak the affected area in a mixture of a tablespoon of baking soda and half a cup of water twice daily, and after a couple of days, you will completely remove them.

Add half a teaspoon of baking soda to one crushed ripe strawberry, and spread the paste onto the teeth. After 5 minutes, brush them well, and rinse.  This will make the teeth pearly white and shiny!

“Soda doping”, or the use of baking soda capsules, is commonly practiced by distance runners before races. It is believed to provide similar effects to carbohydrate loading. Also, it improves speed among swimmers. According to researchers:

“Essentially, sodium bicarbonate is an alkali substance that increases the pH of the blood. This seems to reduce and offset the acidity produced in the muscles during intense, anaerobic exercise that produces lactic acid most quickly, such as fast running or swimming.”

Baking Soda as a Natural Cleanser

Baking soda is extremely useful as a household cleanser as well. One interesting fact is that it was used to clean and restore the inner copper walls of the Statute of Liberty during its 1986 restoration. It cleaned grime and did not damage the copper!

Here is how to use it to clean your home: