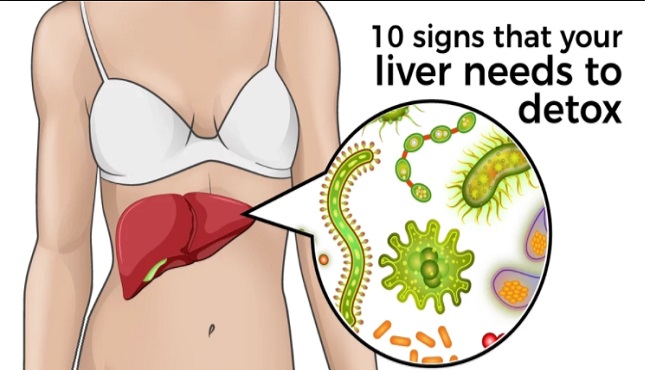 The liver is a second largest organ in your body, which occupies significant space in the upper right abdomen. It plays a great role in digestion, producing bile. The liver converts excess of sugar to glycogen and stores it as a reserve of energy.

Just imagine, what may happen in your body, if this vital organ gets damaged. By the way, the liver has unique ability to replace injured cells and restore their function. That’s why liver disease usually doesn’t cause any symptoms since more than 75% of hepatocytes become affected.

There is a high number of factors, which can contribute to liver dysfunction.

You’ve probably heard that alcohol misuse leads to numerous health issues. In fact, the liver normally breaks down alcohol components and remove them from the body. The problem is when alcohol load is too high, and liver can’t cope with it.

Viruses can also attack your largest solid organ, causing inflammation and loss of its function. Nowadays we know about the existence of viral hepatitis A, B, C and D. In the US hepatitis C rank second (after alcohol abuse) in the cirrhosis causes.

Cirrhosis is an advanced stage of the liver disease, which is characterized by destruction of the liver tissue. Damaged cells get substituted by scar tissue that certainly can’t perform liver’s functions.

It was found that certain medications (acetaminophen, statins, isoniazid, methotrexate etc.) and even so popular herbal supplements (kava, ma-huan and vitamin A dietary additives) may cause liver failure. Do you prefer to gather mushrooms by yourself? Be aware that many of them are poisonous and can affect liver cells. In addition to this, we often make harm to our liver by eating high-sugar, salted, processed and deep-fried foods.

Check up these signs that your liver is full of toxins and can’t work properly:

#1. Jaundice – when your red blood cells naturally die off, they produce a waste product called bilirubin. This chemical normally gets excreted by your liver through the bile. If something goes wrong in liver’s working, bilirubin begins to build up in the body, causing yellowing of the skin and eyes.

#2. Abdominal pain – inflamed liver can enlarge, put pressure on the nerves of the capsule (the sac, which covers the liver), causing painful sensations in upper right part of your belly.

#3. Fatigue – liver dysfunction may result in accumulation of the toxins inside the body. That can cause inexplicable long-term exhaustion, which doesn’t go away after sleep and rest.

#4. Easy bruising – liver normally takes part in the creation of blood clotting factors, you know. Hepatic failure breaks this process. As a result, you may experience abnormal bleedings and easy bruising.

#6. Big tummy – your belly may become large even without eating too much. The reason is that hepatic failure usually leads to ascites (fluid accumulation within the abdomen).

#8. Acid reflux – those who suffer from the liver disorder, often have heartburn.

#9. Loss of appetite – this is a common symptom of wide variety health issues, including hepatic failure.

#10. Itchy skin – we’ve said that unhealthy liver doesn’t remove bilirubin as needed. When this substance builds up in the skin, you may experience unbearable desire to scratch yourself.

Several studies show that eating certain foods like ginger root, raw vegetables, bananas, sweet potato and consumption of natural supplements (milk thistle, dandelion tea, black seed oil and vitamin E) can help detoxify your liver. However, you need to consult with your doctor before taking any remedies and supplements.