We rarely think much of our nails, but according to studies, they can reflect our health status pretty effectively. Any kind of change on our nails, be it a discoloration or a change in shape, can indicate both minor and major health problems, which is why we should pay more attention to them. 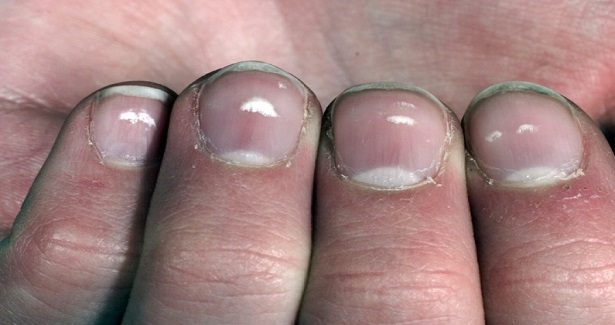 Here are the changes on your nails you shouldn’t ignore:

If your nails are dry, brittle and breaking off easily, you’re probably washing the dishes without wearing protective gloves, exposing your nails to different chemicals that can harm them. Frequent use of nail polish removers might also do the same, but a thyroid disorder may be causing the problem as well. You can resolve the problem by rubbing your nails with a high-quality skin care cream that will keep them healthy and soft.

If your nails are bending downwards and the tips of your fingers start swelling, you may be suffering from kidney problems. In this case, it’s best to visit your doctor as soon as you can.

White spots on the nails

If you have small white dots on your nails, it might be because of lack of calcium or zinc in your body, fungal infections or some kind of allergic reaction. The white spots may also occur due to injuries and are generally not a big cause for concern.

If you have vertical streaks on your nails, it’s just a normal sign of aging.

Constantly biting your nails and the skin around them could be a symptom of obsessive-compulsive disorder. You can resolve this problem by applying a bitter substance on your nails which will prevent you from biting them.

If your nails are pitted and thin, it’s probably a sign of iron deficiency. In this case, you should consume iron-rich foods such as beets more often.

If your nails are pale, it can indicate a problem with the heart or liver or anemia. Visit your doctor immediately in order to diagnose the problem on time.

Small indents on the nails

If your nails have small indents on them, it’s probably a sign of psoriasis. We strongly recommend visiting your doctor in this case.