The meningitis is actually a disease that is best described to be connected with the inflammation of the protective membranes which are covering the spinal cord as well as the brain. Even though the reason for this disease can vary, the symptoms from all of the different kinds are quite similar.

It has been considered that the children are those who are most susceptible to this particular disease. This is why today we have decided to remind you parents about how to easily detect the meningitis and which of the primary symptoms you should pay most attention to.

1. Sudden fever – one of the biggest meningitis symptoms is a fever that starts very suddenly. The child will start to shiver and complain that he or she always feels a bit cold. The temperature of a sick person can go very high in a rapidly time frame, and it can often even become a difficult task to lower it down a bit.

But because of the fact that this is a symptom that is sign of many other diseases, a person should definitely pay more attention to other growing factors within a certain condition with a child.

2. Severe headache – the headaches which are usually caused by the meningitis are not just strong, but they are unbearable. In addition to this, the pain can have a great impact on the neck of the person as well, but because of the splitting headache the person cannot pay much attention to it. This especially goes for the newborn babies, as the headache can be a definite symptom of meningitis.

3. Double vision – the person that is affected by the meningitis will lose the ability to focus his eyesight which is why the vision of the victim becomes doubled.

4. Nausea, stomach aches and vomiting – the person that is sick with meningitis can easily lose appetite. This partially happens because of the constant nausea that can easily be followed by intense stomach aches as well as vomiting.

5. Sensitive to bright light – one other sign of meningitis is the high fear of bright light because it causes watering of the eyes of the child and nausea along with a headache that just keeps getting stronger and stronger.

6. Rigidity of the occipital muscles – the child that is suffering from meningitis can be found in a very unusual position – legs bent, lying on his side, with the head a bit thrown back. All of the attempts to unbend the neck are usually not successful.

7. The inability to unbend the legs – even if you happen to manage to even bend the head of the child to the chest, the legs will immediately bend at the knees and they will later be impossible to unbend from this position.

This is a phenomenon, and it even has a name – the Brudziński neck sign. When it comes to meningitis, what can also appear is the Kernig’s sign, when a person cannot completely extend the leg if it is lifted at about an angle of 90 degrees.

8. Increased and unfading skin rashes – also, with meningitis, the skin rashes are rather possible. You can detect a simple rash that is not connected to meningitis with one small and simple test. Take one clear and empty glass, make sure you press it firmly against your skin and your rash until the skin turns a bit pale.

If the spots turn pale along with the skin, then this means that the person does not have meningitis. But, if the rash does not fade, then you need to seek some medical help immediately.

So, what to do in these cases?

Well, the meningitis is quite a dangerous disease and this is why any of these symptoms, if detected, should instantly be tended to by a medical professional. You should immediately provide the sick person with some quiet, rest, dimmed lights in a room until a doctor arrives and does a full check up.

You should inform the doctor of all the symptoms that you have detected. What is highly discouraged is to refuse the hospitalization of person if there is suspicion of meningitis because it is just possible to treat it effectively only in the department of inpatients. 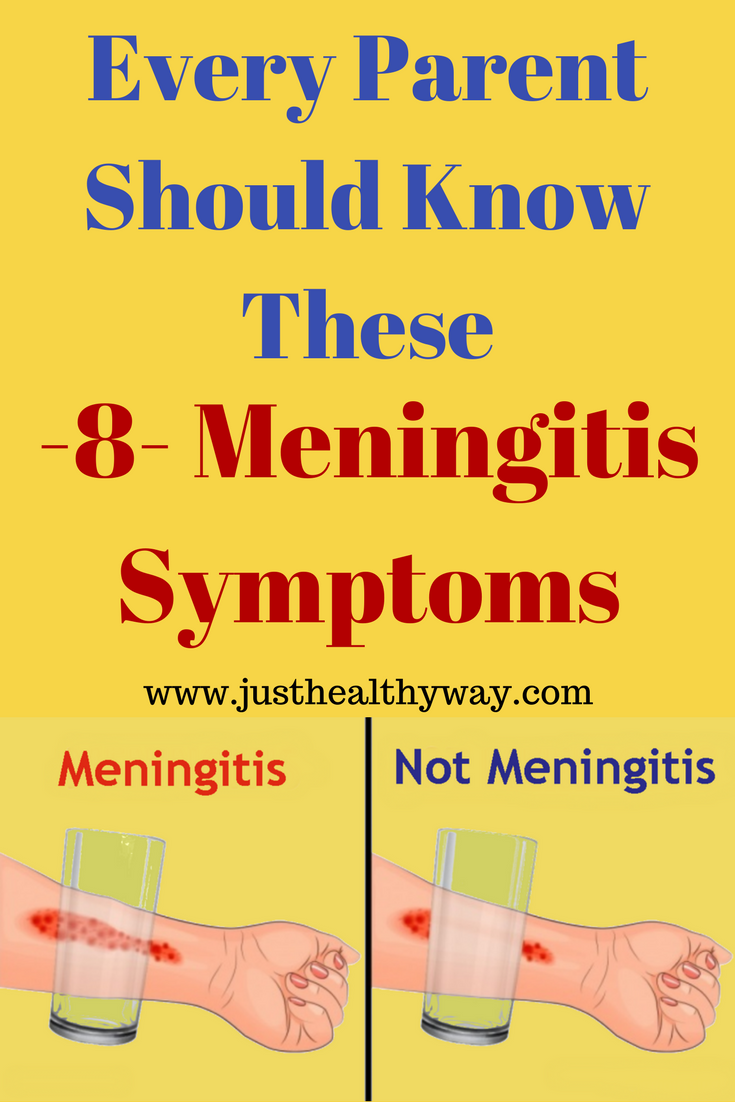